THE TRADES Two forces are working in favour of those looking to build a career in Ontario’s construction industry. Major projects and the retirement of thousands of baby boomers, are driving demand for skilled trades workers across much of the province.

“Ontario’s construction workforce is expected to grow over the next decade,” says Rosemary Sparks, Executive Director of BuildForce Canada. “That means new workers are needed for major projects, with stronger growth expected in the Greater Toronto Area.”

Job growth in the GTA is driven by utilities and infrastructure projects including transit expansion. There are also opportunities in homebuilding and even more in renovation work, as the industry hires each year between now and 2024, to meet the increasing residential needs. Infrastructure and proposed resource development projects add to opportunities in other regions as well.

“To counter rising retirements, over 85,000 new positions will need to be filled this decade.”

While major projects are making it possible for many skilled workers to land a career that’s hands-on, it’s the impending exodus of baby boomers from the industry that’s creating the greatest opportunity for new workers, and the most angst for recruiters. To counter rising retirements, over 85,000 new positions will need to be filled this decade.

“We’re about to lose a whole generation’s worth of experience with the retirement of 21 percent of Ontario’s construction workforce,” added Sparks. “It’s a major exodus, that makes recruiting, hiring and training a priority for industry, and a real opportunity for those starting or changing careers.” 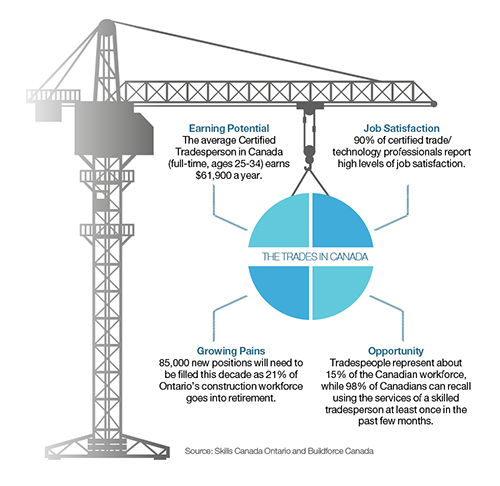